While today's technology is growing increasingly wireless, nature's greatest technology, the human brain, still depends on neurons being directly connected to one another. Two neurons are connected when one extends its axon to the other. This extension is activated by chemical cues that causes the axon to exert a directional force towards the proper direction. While scientists have long known of different molecules that can act as cues, the molecules that initiate the force have remained a mystery. In a new study published in eLIFE, a team of Japanese and American scientists report that shootin1 is one such molecule and is essential for guiding the axon to its final destination.

Naoyuki Inagaki, Professor at the Nara Institute of Science and Technology (NAIST) and leader of the study, explains that there are two molecules that have vital roles in axon guidance.

Concentration changes in nectin-1 cause an axon to change its direction of growth with such abruptness that under a microscope it almost seems like someone is controlling the axon with a steering wheel. However, just how big an effect shocked even the scientists.

"We found that a slight concentration gradient in netrin-1 of only 0.4% induces a 71% difference in shootin1a phosphorylation within growth cones," says Dr. Kentarou Baba, who first-authored the study. "That is remarkable sensitivity."

That means even if the difference between the amount of nectin-1 on the two sides of the growth cone was less than 1%, more than two-thirds of phosphorylated shootin1 would accumulate on the side with more nectin-1, and thus steer the axon to its proper direction.

Further, the phosphorylation significantly enhanced the binding of shootin1 to L1-CAM, a molecule which Inagaki says "are the wheels of the axon." The axons could still grow if the interaction between shootin1 and L1-CAM was disrupted, albeit at a slower velocity, but not in the direction signaled by the nectin-1 gradient.

The findings suggest that shootin1 is a natural chemo-mechanical transducer, converting chemical information into mechanical output.

"Our findings suggest that the polarized phosphorylation of shootin1 within growth cones is required for the directional axon guidance induced by netrin-1 gradients," says Inagaki. 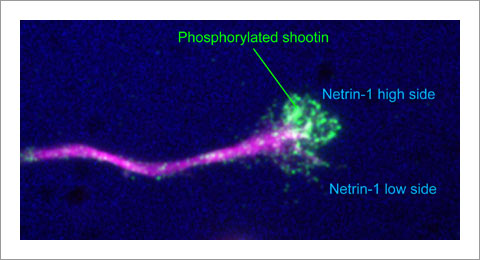 Information about Prof. Inagaki lab can be found at the following website:
https://bsw3.naist.jp/inagaki/english/index.html