They say timing is everything, and that couldn't be more true for cell cycle progression and differentiation. Now, researchers from Japan have found that the circadian clock is crucial for proper plant development.

In a study published in Cell Reports, researchers at Nara Institute of Science and Technology (NAIST) have revealed that the circadian clock plays a guiding role in plant cell differentiation.

"Elucidating how the circadian clock is involved in cell differentiation is important to understand the basis of cell fate determination," explains Motomu Endo, senior author of the study. "However, this has been difficult to investigate in plants because it is challenging to isolate single plants' cells, and existing analytical methods rely on "pseudo-time" analysis that does not accurately reflect normal circadian rhythms."

To address these challenges, the researchers used tiny glass tubes to isolate individual cells from developing plants and analyzed the expression of various genes related to circadian rhythms and cell differentiation in each cell. They then developed a new algorithm called PeakMatch to reconstruct actual-time gene expression patterns from the single-cell datasets.

"Taken together, our results show that the plant circadian clock plays a guiding role in cell differentiation," says Endo. "Importantly, our study also provides an approach for time-series analysis at single-cell resolution."

Because the development of circadian rhythms during cell differentiation is observed in animals as well as in plants, the finding that clock genes directly regulate cell fate determination and cell division may help understand how cell differentiation is controlled in multicellular organisms. The newly developed PeakMatch algorithm can also be applied to all kinds of single-cell transcriptomes in other organisms. 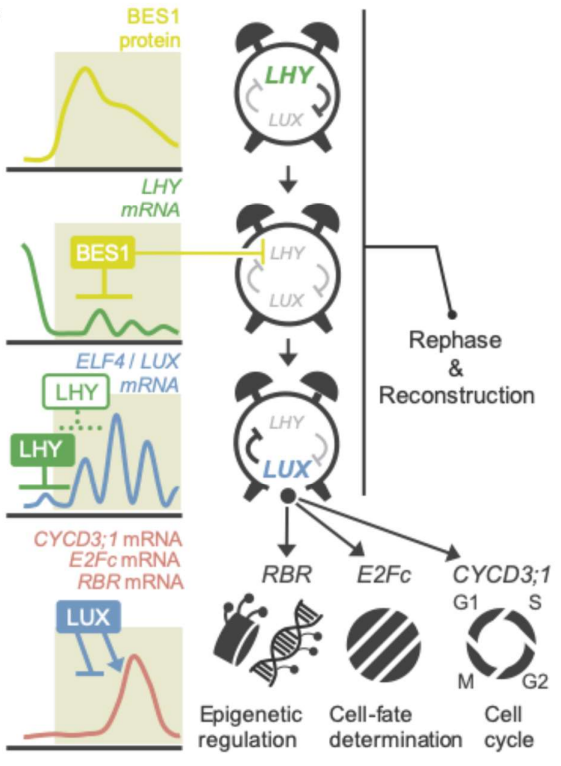