A team of researchers led by Professor Keiji Nakajima finds that the ancestral role of KNOX and BELL transcription factors in plants is zygote activation, later switching to meristem maintenance during plant evolution

Sometimes in research, just as in other areas of life, answers to fundamental questions can be sitting in plain sight. Researchers of NAIST, Kyoto University and Gregor Mendel Institute have together discovered a key piece of the puzzle of plant evolution previously overlooked by plant scientists. 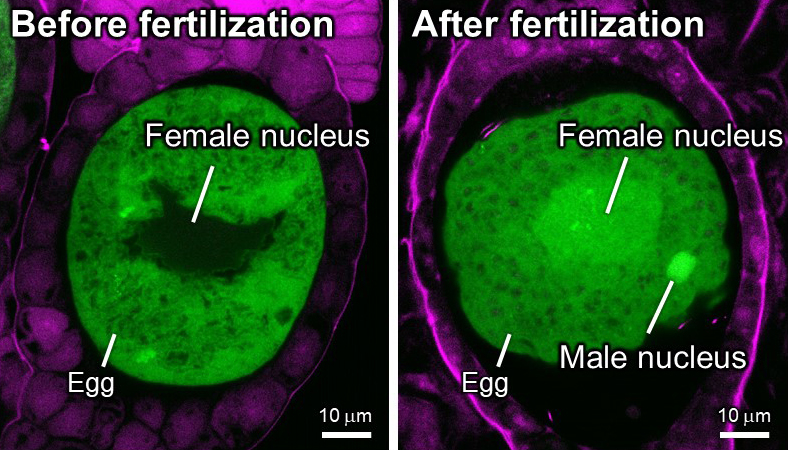 Egg cells of the liverwort Marchantia polymorpha before (left) or after (right) fertilization. Green and magenta colors indicate localization of MpKNOX1-GFP proteins and maternal tissues, respectively. Note that fertilization triggers enrichment of MpKNOX-GFP in unfused male and female nuclei.

In a study published in eLife, a team of researchers led by Prof. Nakajima has revealed that an ancestral function of the plant KNOX/BELL proteins is activation of the zygote (the first diploid cell formed by the fusion of female and male gametes, also known as reproductive cells), and this role shifted toward the maintenance of organ development during the evolution of land plants.

One of the central questions of developmental biology is how parental genomes mix in a zygote and are activated to begin diploid development. Two proteins, KNOX and BELL, function as transcription factors - proteins that play an essential role in gene expression. KNOX and BELL activate diploid development in plants such as unicellular green alga, but in land plants such as angiosperms (flowering plants) they play a part in the maintenance of the shoot meristem - the tissue that generates the whole of the plant that grows above ground - and the process of organ formation in the later stages of diploid development.

"It's unknown if the differing functions of KNOX and BELL were attained separately in land plants and algae," says Nakajima. "Although mostly dismissed from the spotlight by plant biologists until now, the zygote-activating functions of algal KNOX/BELLs, and how they relate to those of land plants, were the focus of this study."

To investigate this, the research team looked at a basal land plant species, the liverwort Marchantia polymorpha, which has recently been recognized as a good model for studying the evolution of land plants, especially in sexual reproduction research. The team found that gamete-expressed KNOX and BELL genes are needed to begin zygote development by promoting nuclear fusion in the zygote in a way very similar to that previously found in the green alga Chlamydomonas reinhardtii.

"Our results suggest that the ancestral role of KNOX/BELL transcription factors is zygote activation," explains Nakajima. "As land plants evolved, this moved toward meristem maintenance."

The results of this study will be important to plant biologists working across a range of fields such as embryo and organ formation, sexual reproduction and evolution. These findings, in addition to the proposal of an equivalent scenario in groups such as fungi and animals, will also be relevant to researchers in the wider biological sciences.