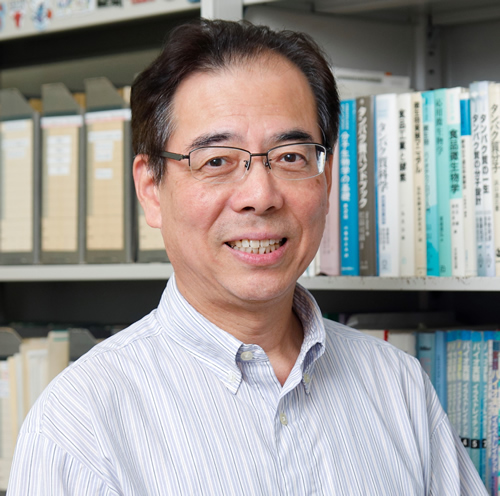 Sake is a traditional Japanese alcohol beverage made from steamed rice by multiple parallel fermentations of the fungus Aspergillus oryzae and the yeast Saccharomyces cerevisiae, which produce saccharification enzymes and ethanol from glucose, respectively. The sake yeast used in sake brewing can produce ethanol to a concentration of approximately 20% (v/v). During sake fermentation, yeast cells are exposed to high concentrations of ethanol which drastically inhibits the growth, viability and fermentation of yeast cells. Therefore, increased tolerance to ethanol in sake yeast strains could improve ethanol productivity and reduce fermentation time.

Prof. Takagi previously reported that the amino acid proline (Pro) confers tolerance to ethanol on yeast cells. In this study, to improve the ethanol productivity of sake, Masakata Ohashi (Nara Prefecture Institute of Industrial Development) and the Talagi lab successfully isolated several Pro-accumulating mutants derived from diploid sake yeast by a conventional mutagenesis. Interestingly, one of them (strain A902-4) produced more than 10-fold greater amounts of ornithine (Orn) and Pro compared to the parent strain (K901).

Orn is a non-proteinogenic amino acid and a precursor of both arginine (Arg) and Pro. It has some physiological functions, such as amelioration of negative states such as lassitude and improvement of sleep quality. They also identified a homo-allelic mutation in the ARG5,6 gene encoding the Thr340Ile variant N-acetylglutamate kinase (NAGK) in strain A902-4. The NAGK activity of the Thr340Ile variant was extremely insensitive to feedback inhibition by Arg, leading to intracellular Orn accumulation. This is the first report of the removal of feedback inhibition of NAGK activity in the industrial yeast, leading to high levels of intracellular Orn. Moreover, sake and sake cake brewed with strain A902-4 contained 4-5 times more Orn than those brewed with strain K901. The approach described in this study could be a practical method for the development of industrial yeast strains with overproduction of Orn. Orn-rich sake brewed with strain A902-4 has been successfully commercialized by the local breweries in Nara, Yagi Shuzo, Kikutsukasa Jyozo and Kuramoto Shuzo.

Prof. Takagi also says “There are two major purposes for breeding of industrial yeast: improvement of fermentation ability with enhanced tolerance to environmental stresses during fermentation processes and diversity of product taste and flavor with modified metabolic pathways. In yeast, amino acid metabolisms vary under different growth environments and the metabolic styles form a complicated but robust network. The elucidation of metabolic regulatory mechanisms and physiological roles for amino acids is important fundamental research for understanding life phenomenon. Yeast is reliable and safe in food production, and thus the development of novel strains that overproduce ‘functional amino acids’, such as Orn, Pro and branched-amino acids, would greatly contribute to food-related industries.”

Orn and Pro content in (A, B) sake and (C, D) sake cake. Sake and sake cake was brewed with the parent strain K901 and the Pro- and Orn-accumulating strain A902-4.

Information about Prof. Takagi Lab can be found at the following website:
https://bsw3.naist.jp/takagi/?cate=183