Abnormal activation of the proto-oncogene product AKT has been pointed out as a major contributor to cancerous cell proliferation in diverse types of human tumors. AKT is activated by a protein complex called TOR complex 2 (TORC2), which is therefore expected to be a promising target for future anti-cancer drugs. A research team led by Profs. Kaz Shiozaki (NAIST) and Chojiro Kojima (Yokohama National University/Osaka University) has discovered that Sin1, one of the TORC2 components, directly binds AKT, through the genetic study of TORC2 in the fission yeast Schizosaccharomyces pombe. The Sin1 protein has an evolutionarily conserved domain known as "CRIM (Conserved Region In the Middle)" that recognizes and binds AKT during the process of AKT activation by TORC2. The three-dimensional structure of the CRIM domain determined in this study provides critical information to design a new type of chemotherapeutic agent that blocks the interaction between TORC2 and AKT, thus preventing AKT activation required for tumor growth. 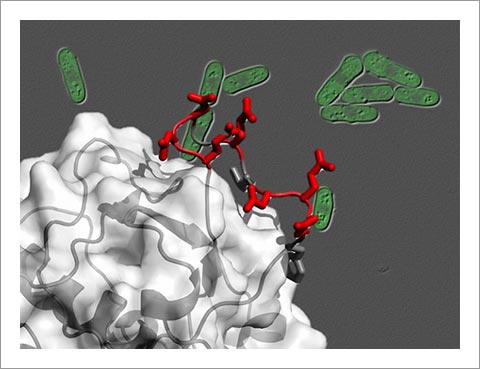 Fission yeast cells and the CRIM structure determined in this study