The tips of plant roots are commonly covered by a specialized tissue called the root cap. The root cap supports root growth by mechanical protection of the root tip, gravity-sensing, metabolite secretion, and active cell dispersal toward the soil environment. To this end root cap cells continuously turn over by balanced proliferation of inner stem cells and detachment of outer mature cells. The mechanisms by which root cap cells mature and detach from the root tip, however, are poorly understood.

Prof. Nakaijma's group performed detailed functional analyses of the three transcription factors, SMB, BRN1 and BRN2, known to promote root cap differentiation in Arabidopsis roots, and found that the latter two factors are specifically expressed in the outer root cap layers by sensing cell positioning. Then, the group identified 60 genes that are regulated by the three transcription factors and are likely functioning in the root cap differentiation process. These genes are found to encode enzymes acting on cell wall components and lipid biosynthesis, or those involved in intracellular trafficking.

Among the 60 genes, the group focused on a gene named RCPG that encodes a pectin-hydrolyzing polygalacturonase, since degradation of cell wall pectins is expected to promote cell-cell separation. RCPG was found to be specifically expressed in the detaching root cap cells and mutation of RCPG affected the shape of the detaching root cap layer and their removal from the root tip. Consistently, overexpression of RCPG resulted in uncontrolled detachment of root cap cells. Finally, RCPG expression was shown to be regulated by direct binding of the BRN1 transcription factor to the RCPG promoter.

Collectively, these data revealed a novel mechanism in which outer root cap cells sense their position and activate the production of cell wall-degrading enzymes to promote their own detachment. This study also elucidated a genetic pathway linking the regulatory factors to a cell behavior unique to the plant root cap. As plant root caps play important functions not only to support plant growth but also to adjust soil conditions and carbon flow from the atmosphere to the underground, this study also provides a scientific basis for future improvement of plant growth and protection of soil environments.

More information can be found at the website of Nakajima lab.
https://bsw3.naist.jp/nakajima/English/index.html 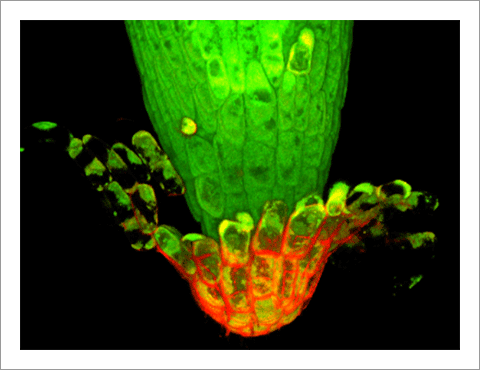