Discovery of a key regulator of plant germ cell formation

In contrast to animals where pluripotent germ cell lineage is set aside early in embryogenesis, germ cells in plants differentiate later in reproductive organs, and are hence generated by reprogramming somatic cells. Factors controlling germ cell differentiation and pluripotency, however, are poorly understood in plants. Prof Nakajima’s group has previously identified Arabidopsis RKD4 as a regulator of early embryogenesis and a factor capable of reprogramming somatic cells into embryonic status. While RKD homologs are ubiquitously found in the plant genomes, their biological functions have been demonstrated only for the Arabidopsis RKD4. In order to understand the functions of RKD factors shared among land plant species, the group used a recently developed liverwort (Marchantia polymorpha) system that features low genetic redundancy, targeted gene knock-out technique, and an asexual reproduction process that enables maintenance of gamete lethal mutants. They found that the single RKD gene of M. polymorpha is essential for the formation of egg and sperms, and that the multiple RKD genes in the Arabidopsis genome may have been functionally diversified to control distinct aspects of early developmental stages. 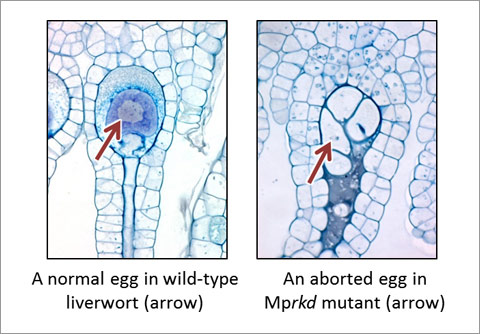 More information can be found at the website of Nakajima lab.
http://bsw3.naist.jp/nakajima/English/index.html