Assistant professor Akio Tsuru, professor Kenji Kohno in the Laboratory of Molecular and Cell Genetics, Graduate School of Biological Sciences, and coworkers found that IRE1β, one of endoplasmic reticulum (ER) stress sensors, plays a critical role in efficient production of mucin. Their findings are expected to be an important clue to the elucidation of the onset mechanism of inflammatory bowel disease.

Secretory proteins have to be folded in the ER after the translation by ribosomes on the ER membrane and translocation into the ER lumen. IRE1β have been regarded as a molecule that monitor the luminal environment of the ER, but it was not known what kind of cells expressed this molecule and what kind of role this molecule played. Professor Kohno and coworkers found that IRE1β is specifically expressed in mucin-secreting goblet cells, but misfolded mucins accumulate in the distended ER of IRE1β-deficient goblet cells (Fig. 1). Further study revealed that IRE1β decreases mucin mRNA to appropriate amount in order to regulate its translational rate within the protein folding capacity of the ER; this “fine tuning” of translation may enable the efficient mucin production.

The role of mucin is known to shield the gastrointestinal tracts from bacteria, and the low quality or low quantity of mucin may cause ulcerative colitis or cancer. IRE1β knockout mice were also reported to be sensitive to the drug that induces colitis. Study by Professor Kohno and coworkers suggested that mucin synthesis in IRE1β knockout mice exceeds the capacity of the ER and then induces the accumulation of the misfolded mucin, resulting in the retardation of the secretion and the decrease in a coat of mucin on the surface of intestinal tracts. This may increase the risk of ulcerative colitis. These findings suggest that since the dysfunction of IRE1β can be a risk factor for ulcerative colitis, the further study of IRE1β should also be required to reveal the cause of this disease. 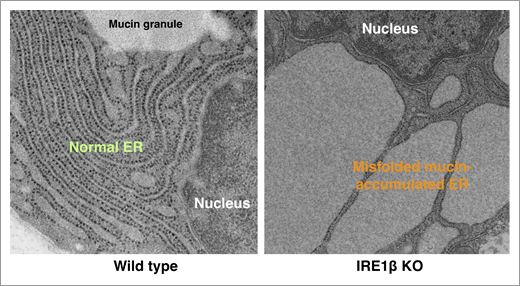 Related link
The paper is published in the Journal below.
http://www.pnas.org/content/110/8/2864.abstract