Development of a multicellular organism usually starts from a single fertilized egg, the zygote. How this single cell can yield the highly complex tissues and organs of the adult body is of particular interest. In angiosperms (the most prevalent seed plants), zygotes are embedded within developing seeds, which are further sequestered within the ovary, the female organ at the flower. Because of this inaccessibility and the difficulty of handling tiny embryos, molecular mechanisms regulating the very early stage of plant development are poorly understood, compared with recent advances in the study of other developmental aspects of plants.

Associate Professor Keiji Nakajima and coworkers in the Laboratory of Plant Cell Function, Graduate School of Biological Sciences, have now discovered that the Arabidopsis thaliana transcription factor RKD4 activates the expression of a large number of early embryo-specific genes, and can reset the developmental programs of somatic (post-embryonic) cells to their early embryonic status. RKD4 belongs to the RKD subfamily of plant-specific RWP-RK proteins. Despite their wide distribution in the plant kingdom, no biological functions had been assigned to RKD proteins before this study.

Dr. Nakajima’s group report that in the life cycle of Arabidopsis, RKD4 is expressed only during a short period from the zygote to the early embryo, and that most RKD4 disruptants die at a very early stage of embryogenesis. Surprisingly, forced expression of RKD4 in germinated plants (which normally do not express RKD4) resulted in the formation of undifferentiated cell clusters, which then produced viable embryos after the RKD4 expression was turned off. These results indicate that RKD4 is both necessary and sufficient for the initiation of early embryogenic programs.

In mammals, somatic cells can be converted to “induced pluripotent stem cells (iPS cells)” by introducing selected transcription factor genes that are highly expressed in embryonic stem cells. In the case of Arabidopsis, introduction of RKD4 alone is sufficient to convert somatic cells to embryonic cells that can regenerate viable plants. RKD4, or its counterparts in other plant species, is thus important both for basic plant developmental studies and for future technical applications, such as the rapid propagation of useful plant lines and endangered species, or the creation of cell lines with desired characters. 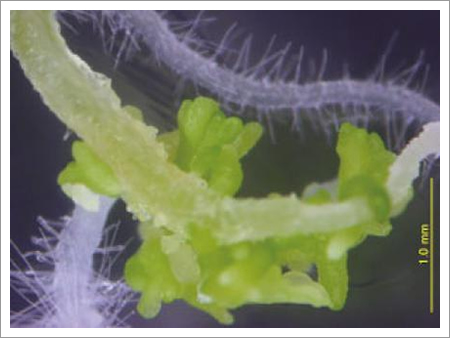 Embryos (green) emerge from the surface of an Arabidopsis root that has been forced to express RKD4 and then released from the RKD4 expression.