Several classes of RNA molecules play essential roles in converting genetic information to protein products. Well-known examples are messenger RNA (mRNA), transfer RNA and ribosomal RNA. As well as these classical RNA molecules, a large number of small RNA molecules with important regulatory functions have recently been identified in both animals and plants.

Associate Professor Keiji Nakajima and coworkers in the Laboratory of Plant Cell Function, Graduate School of Biological Sciences, have now discovered that microRNA165, a member of a class of small RNAs that degrade specific mRNA targets, diffuses from the site of its production into neighboring cells in the Arabidopsis root, forming an activity gradient across the root radius. This microRNA165 gradient controls the distribution pattern of its target mRNA, encoding the PHABULOSA (PHB) protein, which in turn determines root cell differentiation in a concentration-dependent manner.

In both animals and plants, cell differentiation is generally determined by position rather than lineage, indicating that each cell can somehow sense cell-cell distance. In animals, signaling molecules called morphogens are known to play this role. Emitted from a local source, morphogens form a concentration gradient by which the recipient cell perceives its distance from the source cell. The present finding indicates that in plants, microRNA165 acts in a similar way to animal morphogens. This is the first report showing the existence of a morphogen-like system in plants. 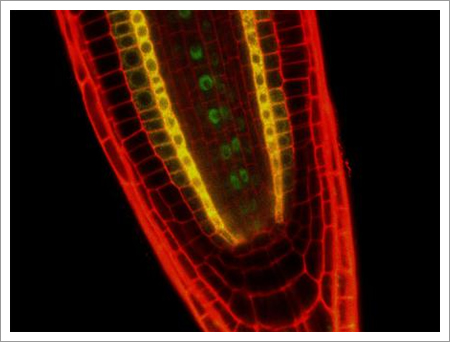