Professor Takashi Hashimoto and Assistant Professor Tsubasa Shoji(Graduate School of Biological Sciences) have discovered master genes in tobacco plants that regulate all known structural genes required to synthesize the bioactive alkaloid nicotine. In tobacco cultivars with low nicotine content, these master genes are deleted. Such genes may be useful in engineering tobacco plants with reduced nicotine levels, and in increasing the levels of pharmaceutical compounds in medicinal plants.

Although tobacco cultivars with very low nicotine content have been produced by classical breeding, the molecular basis of these low-nicotine phenotypes has been unclear. This study found that highly similar transcription factor genes are clustered in one chromosomal region of the tobacco genome, and that at least seven of them are missing in the low-nicotine tobacco plants. These master genes are shown to control all the tobacco genes encoding enzymes and transporters that are necessary for the synthesis of nicotine. The study was published online in the journal Plant Cell on October 19, 2010, and can be accessed by clicking on the following link: http://www.ncbi.nlm.nih.gov/pubmed/20959558 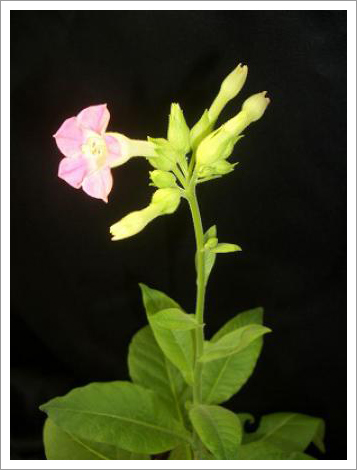