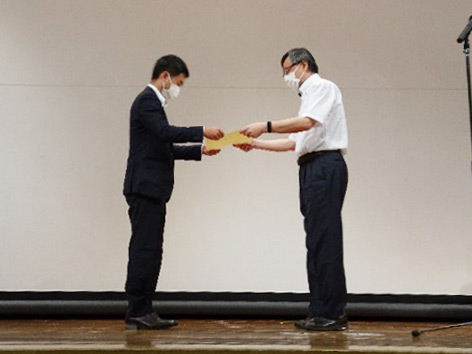 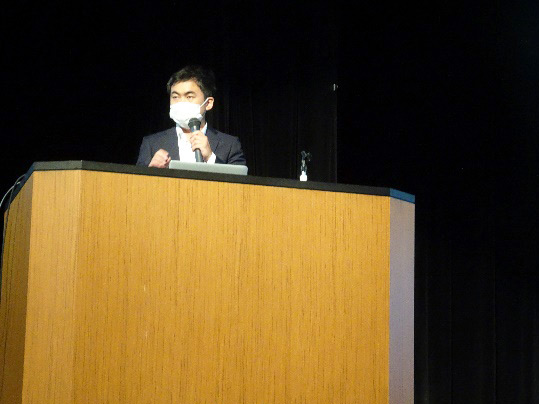 Assistant Professor Songkui Cui(Laboratory of Plant Symbiosis) received the 18th Umesono Prize. The 18th Umesono award ceremony was held on July 29th at the Millennium Hall. Dr. Cui delivered a lecture in English to many students and staff members. This year, it was held on the same day as the Bioscience Division Award Ceremony.

The Umesono Prize has been awarded annually since 2004 to young researchers in Graduate School (Division) of Biological Sciences at NAIST who significantly contributed to biological sciences during his/her years at the institute. The prize is awarded to young researchers with a bright future to follow in the footprints of Dr. Umesono, who enriched us with his personal and intellectual generosity. His spirit continues to inspire us and light our way. The award is mainly based on the originality and academic value of a paper which the awardee wrote as a first author. 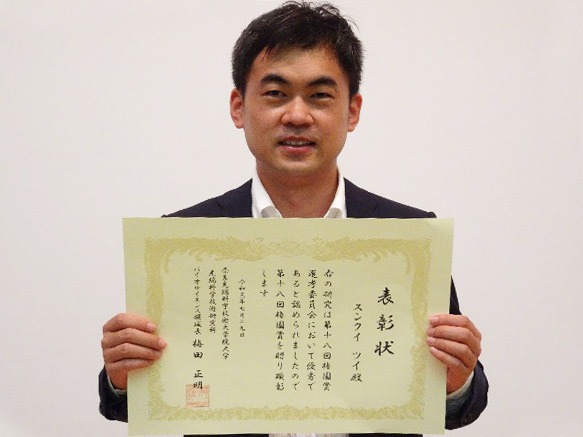 I feel really honored to receive Umesono Award from the Division of biological science since I joined NAIST for 5 years. Although there were many problems and difficulties to solve on the way of publishing this work, I had more exciting moments when new things were discovered. I think this prize is also a great recognition of our teamwork contributed by many collaborators. I am extremely grateful for Professor Satoko Yoshida who gave me lots of freedom and supports in conducting scientific research.

Abstract:
Parasitic plants develop haustorium, a multicellular organ, to infect host plants and acquire water and nutrients. Such features led some parasitic plant species such as Striga hermonthica devastating agricultural pests, causing an economic loss of billions of US dollars per year. Haustorium development involves intimate interspecies signaling interaction and is strictly controlled by both intrinsic cellular programs and host-derived signals. Recent advancements in imaging and molecular studies have provided a deeper insight into cell fate changes, gene network, and molecular exchange within haustorium, yet the parasitic plant genes that mediate plant parasitism are largely unknown. To understand the genetic regulation of haustorium development, we initially conducted forward genetic screening in a model species Phtheirospermum japonicum, a close relative of Striga. Two mutants were identified showing longer haustoria compared to those of the wild type, due to extended cell division at the haustorial apex. To identify the responsible genes, we conducted whole-genome sequencing and developed an SNP detection pipeline. Mutation loci were located in an ethylene receptor ETHYLENE RESPONSE1 (ETR1) and ethylene signaling transducer ETHYLENE INSENSITIVE 2 (EIN2), respectively. Indeed, both mutants were insensitive to the ethylene hormone. Notably, these mutants showed strong defects in host invasion, leading to failure in host infection. Besides, the Arabidopsis mutant producing less ethylene was less invaded by P. japonicum, indicating that parasitic plant targets host ethylene as a signaling molecule during infection. Concomitantly, exogenous application of ethylene inhibitors successfully blocked the infection. Our study is the first report of parasitic plant genes using forward genetics and implies that parasitic plant uses core components of ethylene hormone signaling to mediate plant parasitism in response to external signals.